Racing With My Pet Turtle

Nothing could be more humbling than losing your pet turtle while competing in an athletic competition.  Why would you run with your pet turtle in the first place?  You ask.  Why risk it’s escape?  Well I didn’t plan on bringing it.  I actually avoid having any vegetables the day before for fear of tempting my turtle with them.  I wonder how often a turtle escapes from it’s shell when someone happens to be racing with theirs.  An exploding turtle might not be as rare as you think.  The embarrassment of one losing their beloved pet turtle might prevent someone from talking about it.

I entered an MUD RUN (ironic, turtles like mud don’t they?)  last year and after I started the race, I realized that I had unknowingly brought my pet turtle with me.  I had it under my shirt and every time I took a step it would kick me in the stomach.  The race was only a 5k, so I figured that it wouldn’t be a big deal if I just ran with it for the rest of the race.  I had about a half mile left when he started to stick his head out.  I felt like it might get a little bit too dangerous if I kept running, so I considered walking which I really didn’t want to do.  I had been keeping pace with this girl and I really wanted to finish the race.  Well my pet turtle was getting way to excited and kept sticking its head out.  I was worried that it might just jump right out of it’s shell.

I made my decision.  I broke off from the girl that I was keeping pace with and left the course and ran down a hill that had a lake at the bottom of it.  The only humane thing to do was release the turtle, which I did.  As I let it go, it fled down the hill without looking back.  I really have to say it was quite a relief.  I still finished my race and left my turtle to fend for itself

Spartan Race Fenway Park – Follow Your Own Path, Others May Join You

I use to wait around on other people so that I could do things that I wanted to do.  If I still did that instead of running in 8 obstacle races/mud runs, I probably would have run in NONE.  Are people really herd animals or pack animals?  It is nice to have other people around, but I realized that I was much happier just doing the things that I wanted to do whether or not I had other people with me.  If you can’t break off on your own it can be difficult to do some of the things that you may really want to do.  Besides I usually end up meeting other people at these races, that also have the same type of motivation and challenge in themselves that I have found in me.  These races are addictive for people who are looking for a challenge.

On November 17th, I ran in the Fenway Spartan Race.  I entered the race a few months earlier and told some friends that I was running in it and asked if any of them wanted to run.  3 of them took me up on it and 2 others came out to support us.  None of them really knew what to expect until after they signed up, so it got kind of funny when they started asking me about some of the obstacles.  Sue was already very active but hadn’t run in this type of race yet.  Chris and Sheila decided to start working out so that they could get ready for the race.  Sheila even started to make changes to her diet.

The Spartan was challenging just like the last one that I did, but it was only 2.5 miles.  They did cram a lot of obstacles into those 2.5 miles and we ran all over the stadium steps.  On top of that we had to do burpees a number of times.  If you screwed up certain obstacles you rewarded with 30 more burpees.  Those things suck.  The only one that I screwed up on was the spear throw.  It kind of feels like throwing the piece of paper that a straw comes in.  Hard to balance and not real heavy.  The race was a blast.  At the end you get the opportunity to run over 3 or 4 Gladiators or get the opportunity to have them slam you into the wall. 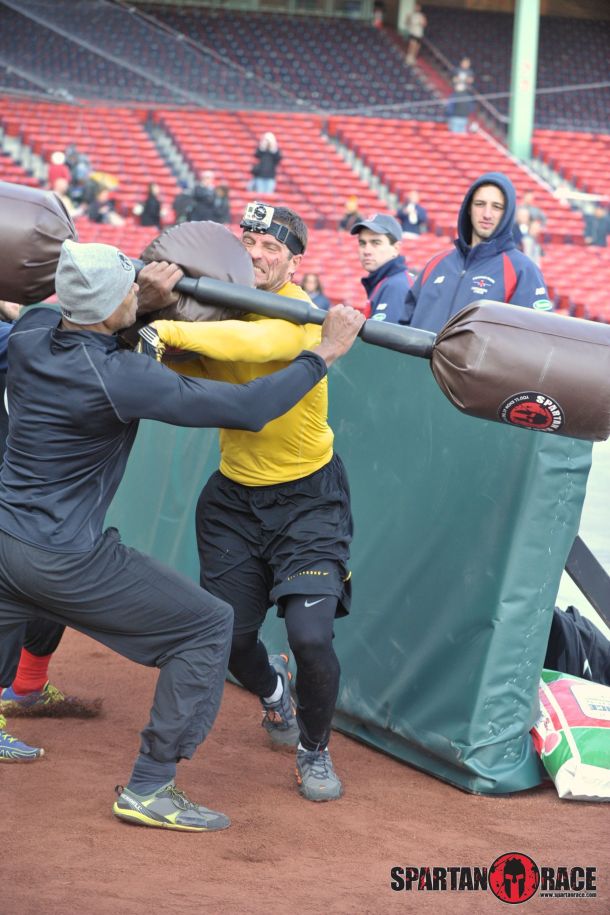 Sheila fell about half way through the race and banged up her elbow pretty bad.  She had been telling me how much she was looking forward to this race ever since she signed up.  I could tell that it was something that motivated her and helped her set a goal that put her on the right track of training and nutrition.  So falling down and jacking up your elbow really stinks when you are that close.  The first thing that probably went through her mind was this hurts like hell.  I think its broken.  Kind of funny how you focus on completing something and now your mindset becomes fight through the pain and finish.  That is exactly what she did.  She came that far and knew that she couldn’t walk away from it without crossing the finish line.  She worked to hard to get there.

All three of them have told me that not only did they love running in the Spartan but that they wanted to do more of them.  These are not just races they build character and can help you find what you are made of.  I am glad that I had the three of them run with me and the other two hang out with us.  They can all be proud of their accomplishments.  I know that I am.
You might have to Learn to S.W.I.M.™ on your own but there are always people who can support you and help you on your way.

What The Quality Of Life Means To Me 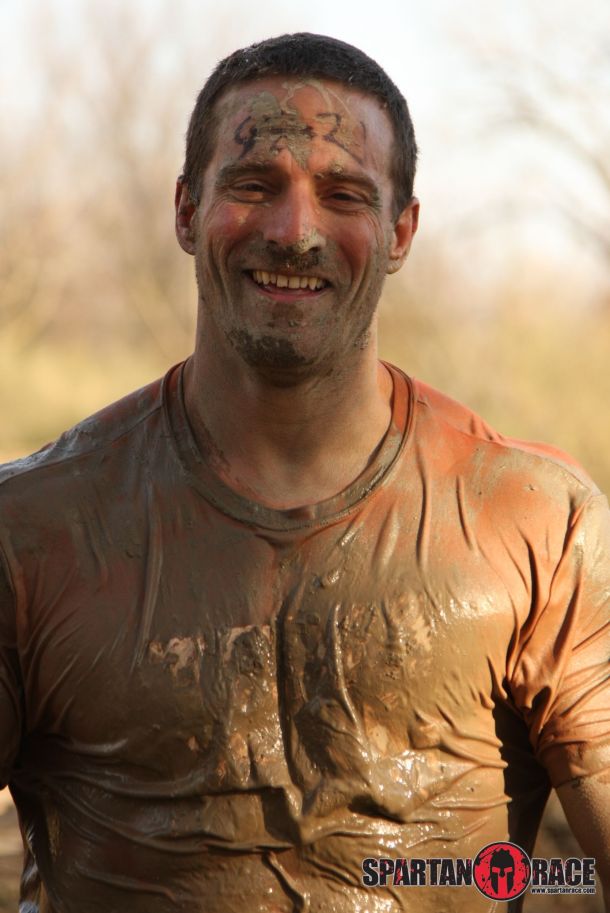 1) Living a healthy lifestyle and enjoying it – By making changes to my life I have reduced the risk of a stroke, heart disease, cancer and many other diseases.  I have done all of this with food that I actually enjoy.  Recipes like Fruit and Nut Bars  or Coconut Flavored Chocolate  actually make me feel like I am eating something that can’t possibly be good for me.  I don’t feel like I am missing anything and I am eating healthy.  I also enjoy working out and actually do workouts that have quite a bit of variation.  I compete in Mud Runs and Obstacle Races.  I hike and spend a lot of time out doors.
I actually thought about what it would be like to have a stroke and survive.  I would not want to be a burden on others and I definitely would not want be paralyzed on one side due to a stroke.  Obviously there are other things that could happen to me but I  would rather limit my health risks.

2) Finding my passion – Experiencing Life the way it was meant to be experienced –  Live and do things that make me feel alive.  Do things that are fun.  For me it is competing and challenging myself.  20 years without it is a long time. It’s working out.  It’s helping others achieve a healthy lifestyle.  Hearing that I made a difference in someone else’s life actually motivates me even more. 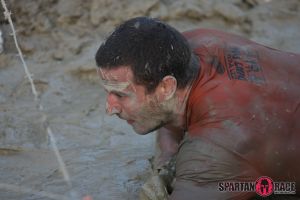 Someone else could actually use their own body transformation to help them find what they are missing.  Turns out that it is much more than just a body transformation.  Maybe they haven’t discovered it yet.  If that is the case or if they haven’t pursued it maybe it is for the same reason that it took me so long to find mine.  Or at least to reconnect with it.  I was consumed with work.  I didn’t know how to allocate my time.  Giving myself a break to do the things that I love actually makes me more efficient with work.  It also makes me realize the wasted time that I spent.  My passion might actually become work.  I doubt that I will complain about that.  No excuses.  If I want to do something I do it.  I won’t make excuses on why I can’t do them and I won’t wait on others to do them with me.  If someone else wants to come along great.  (I use to see or hear about things that I wanted to try or do and would wait for someone to come along.  If I continued to wait I still might not have done my first Mud Run/Obstacle Race.  3 friends did the Spartan Race with me in Fenway Park the other day.) If not, I’m on my own.  Fine with me.  It’s my passion not theirs.  If someone’s passion is knitting I probably won’t be able to find the time to spend on knitting with them.  But if that makes them happy great.  Your passion may not have to do with training or nutrition or mud runs/obstacle races (however, try a mud run and see if you don’t get hooked).  It amazes me how many people have told me for the last year that they want to do one of the races and still haven’t.  That kind of accomplishment does hook people).  If you don’t have time to spend on your passion, make the time.  You will be happy that you did.  It will change your life.

3) Spending time with family, friends and my dogs Bailey and Riley – It’s nice when it involves my passion but like I said not everyone will spend the time on mine.  Just make memories and memorable times.  Have fun.

When I do die, I want to be able to say that I lived life the way that I wanted to live it.  That I enjoyed it and didn’t waste a day.
I’m sure that I can go on and on but I have only recently started to reprioritize my life and these are the things that I am spending time on now.  Learn to S.W.I.M.™ and find your passion.