Lack Of Probiotics Might Make You Pass For Pregnant 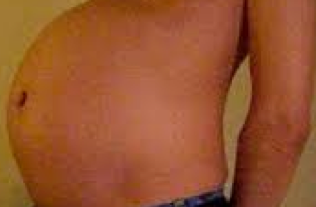 I was at the on a business trip with a friend of mine, who I had just seeing 2 months earlier.  When I saw them this time, I thought, “Wow, they must be pregnant.”  From the looks of things they were due any day now.  I thought that it was kind of strange, since I hadn’t even noticed the pregnancy the last time that we hung out and they never even said anything about it.  The other odd thing was that my friend is a guy.  Well maybe he got fat really fast.  Could happen.

Later on that day he tells me that his stomach is bloated and keeps getting bigger.  He said that he had walking pneumonia the last time that I saw him.  He was on antibiotics for a couple of weeks to get rid of it.  That’s about the time the bloating started.  By the way he lifted up his shirt to show me and he really did look pregnant.  His belly button alone was bigger than a baseball.  I was expecting Alien to jump out.

The first thing that I did was call TMZ to get them to do a story on a pregnant man.  After that I called up a friend of mine that is a biochemist.  Right away he told me that it was yeast growing inside of him.  When he took the antibiotics, they killed the bad bacteria, but they also killed the good bacteria.  Without the good bacteria yeast can flourish.  The gas produced by yeast can cause bloating. If not treated it can cause a lot of other problems, including leaking gut.

Unfortunately, TMZ has no interest in doing a story on a guy who has yeast overgrowth and a baseball sized belly button.

If you are on or have taken antibiotics, it would be wise to make sure that you can build up your good bacteria.

launches a project every month

Everyday Power Blog
I Am a Spartan