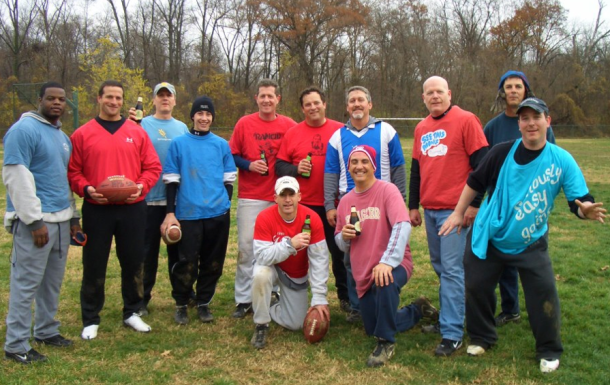 When I met Bill Phillips, one of the things that he spoke about was humor.  He has also written about it in his book “Transformation“.  Laughing a little or a lot everyday does make a difference.   Laughter  relieves stress, boosts the immune system, releases endorphins (which can relieve pain), and increases blood flow which may help your cardiovascular system.  Most of my blog is meant to inspire, motivate or provide information.  However, I do like to include stories that I think are funny.  Hopefully, I am not the only one laughing.  With Thanksgiving taking place today, I figured I would write about a Thanksgiving that took place in 2010.  Our annual Turkey Bowl.  This is a once a year game and in no way means that I would consider it a workout or believe that it fits in with my training program.  Well now that I think of it I guess this game is really good for those of us playing because we are laughing most of the time.
I’ve been playing with some of the same people in Turkey Bowl each year for over 20 years in Rock Creek Park in Maryland.   In the early years I actually would play in two different games that day. When “Old Age” crept up on me I stuck with one. Two years ago I invited my friend Oscar to play. Oscar showed up in his hoodie while we were picking teams and when asked if he had played football in high school, he said, “a little bit”. He ended up on the opposing team from me and he had made a bunch of plays. I had to let him build up his confidence. In the second half he must have been getting bored because he locked up his Turkey Bowl MVP with something like 7 TDs. I made my plays and had a pick and a couple of TDs also.
The next day I had made plans to go to the Redskins game with my friend Olandis Gary – former Bronco (he broke Terrell Davis Rookie Rushing Record) (current owner of Repax), my brother Adam (who organizes our Turkey Bowl) and another friend Kelly (Turkey Bowl Player). Olandis was the last pick up since he lives close to Fed Ex Field. Adam had met him before, but Kelly hadn’t. The whole ride Kelly is bitching to Olandis about the Ringer that I brought to the game. He was telling him how this guy embarrassed everyone. He did admit that the Turkey Bowl was still fun. I decided to get into the conversation.
Me: OG (for those who didn’t figure it out that stands for Olandis Gary, not Original Gangster. Maybe it’s original Gary.) What did you do for Thanksgiving?
OG: I played in a Turkey Bowl also.
Adam: Cool. Where?
OG: Oh. It was in Chevy Chase.
Adam: That’s where we play. Where.
OG: Somewhere in . . . Ah. . . Um… Rock. . Creek Park
Adam: What? Oh you mother F>*(#ers.
Kelly: What are you talking about? Who did you play with?
Me: Dam, Kelly don’t you recognize your own teammate?
Kelly: What the Hell. You guys suck.
It was hard to keep quiet for that entire day about having a bunch of guys who are almost in wheelchairs get abused by a former pro ball player. As the other guys found out they flipped.
By the way Olandis if you decide to make any derogatory comments about this I will tell everyone about the time I kicked your ass in HORSE about 9 years ago. (I didn’t say that out loud did I?)
I’m glad that Olandis didn’t see the article Tiki Barber selling his Turkey Bowl Services for $1,950.  He might take our milk money.