Tag Archives: who is your hero

Inspired By Mom: Where Did You Get Your Drive And Determination? 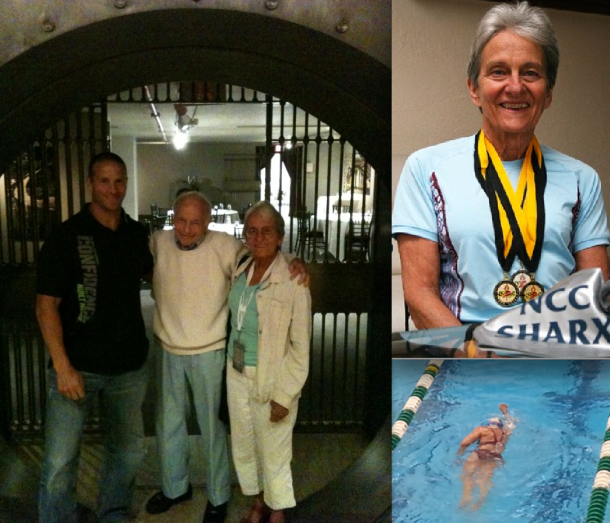 Not long after my mom committed to participating in the Senior Olympics, she called me to tell me about her adrenaline rush during her training.  She talked about this amazing feeling that she had while swimming and thinking about her competition.  It’s one thing to go out and get involved in an athletic activity but it’s another to compete or prepare to compete.  When you visualize going up against your competitors and pulling away for the win or reaching your goals it’s amazing how much that can motivate you.  It’s a feeling that I love to get and hearing her talk about it makes me proud of her commitment.  She has always challenged herself.   She was swam mostly in order to stay fit and relax, more than anything.  I’m sure when she first started, it was so that she could get away from 3 rowdy kids (me and my brothers) for a little while.  A couple of years ago she took a Gold in the Maryland Senior Olympics and did it again this last year.  As I write this she is going on her second day of the National Senior Olympics.  Her events are 100, 200 and 500 Freestyle.  The only thing that makes me realize that she is 81, is that when referring to “Freestyle”, she says, “I’m doing the Crawl”.

She came to most of my football games, wrestling matches, swim meets, soccer games and plenty of other stuff.  She even comes to our annual Turkey Bowl sometimes so that she can watch a bunch of old guys run around and pull hamstrings.  She has always been my biggest supporter.  It’s about time, that I came out to see her compete.

I’d have to be an idiot, not to realize that I am who I am today because of her.  I definitely have to acknowledge my dad for instilling hard work and many other things into me, but this blog is about my mom.  Anyway, I remember being asked, “Who are your “Heroes”?”, when I was younger.  I would think about it and come up with some guy who played in the NFL, that I had no connection to, other than watching him play on Sundays.  Watching a talented ball player can definitely build motivation, but if I don’t know someone than they probably won’t be a “hero” to me.  I still may respect them and appreciate what they do.  There are a few people who I actually would consider “Heroes” to me and a couple of them are professional athletes that I personally know.  For me it is about more than what they do on the field.  It’s about how they prepare and commit.  These guys give it their all and then they give the other 10%.  They make a Promise to Fail in order to get better.  But they also promise not to Quit.   They are also the same guys who go out of their way to help others.  It’s not “all about them.”  Well, when it comes to “Heroes” I can’t rank these guys as high as my mom.  Being Inspired and  Motivated by her has strengthened many of my qualities: Dedication, Determination, Persistence,  Heart, Commitment, etc…  She taught me to know what it takes to Win, to Succeed.

She was also ahead of her time when it came to nutrition.  And she has always been fit and active.  My brothers and I grew up playing sports year round as well.  She participated in running, tennis and swimming.  Not only that but she was living a healthy lifestyle before a healthy lifestyle was “IN”.  Most of our meals were home cooked and they almost always  contained a protein and a carbohydrate along with vegetables.  We had a salad with homemade dressing (usually a vinaigrette) with our dinner every night.  Most of our meals were as a family at the table.  Fortunately, my mom is a great cook.  Enjoying good food everyday, is probably why I also learned how to cook great tasting food.

Honestly, based on how I eat now there are a number of things that I do not include within my Nutritional Guidelines , but for the most part we ate very healthy.   We only had sodas in the house when we had a party.  My parents didn’t really have a problem with it, because if we were out we could get it, but they were able to limit it, by not having it readily available.  After dinner we were almost always given homemade cookies and ice cream for dessert. I guess that we sort of had some kind of cheat every day.  I look back and think that it’s kind of funny that our parents never realized that by giving us sugar after we ate dinner, they were basically asking us to go kick the crap out each other until our sugar high came down.  Either that or it was to get us wound up and then tired out so that we would sleep through the night.   Not sure that the second one was the case.  I guess that was a way for us to burn off some excess calories after our meal.  We would go out to dinner occasionally, but I can not think of a time when we ate at McDonalds.  We  did have fast food maybe a handful of times, but McDonalds wasn’t one of them.  (Unless we went with friends, but not my mom or dad)

My mom would also always make us bag lunches for school.  Peanut Butter and Jelly sandwiches were our typical lunch along with a piece of fruit.  On occasion my dad would make lunch for us, if my mom was not around.  We learned very quickly that it was a big mistake letting him make it.  He would tend to get very creative with his sandwich making ability.  His favorite was a Peanut Butter, Butter and Jelly sandwich.  And no that wasn’t a typo and I didn’t stutter.  He really would add Butter to our Peanut Butter and Jelly sandwiches.  And it would be a huge hunk, which he would place in the middle of the sandwich.  There is nothing like enjoying your Peanut Butter and Jelly sandwich and then all of a sudden, you bite into it and are surprised by biting into a huge lump of butter.  I like butter but not a huge piece on my peanut butter and butter and jelly sandwich.  I would gag on it.  I literally almost puked.  And as a stupid kid it took me a while to figure out that if dad made lunch open the damn sandwich up and remove the stick of butter that he tried to choke you on.  How the hell would I be surprised by this every time.  It must have happened at least 10 times before I learned.  Either that or it happened once and it was so traumatic that it turned into a few hundred times.  If you want to torture your kids try it out on them.

When I was about 9 years old and my brother David and I went shopping with our mom.  As she was walking down the aisle, picking out healthy food to bring home, we were grabbing all kinds of crap and throwing it in the cart.  As soon as it would land mom would take it out and put it back on the shelf and say, “Additives  and Preservatives.  Additives and Preservatives, that’s all that these are.”  We really didn’t know what those big words  were but had assumed that they were bad.  They sure as hell tasted good.  The words just sounded funny to us.  For the next couple years we would mimic her out of the blue.  “Additives and Preservatives”.  It still comes up once in a while.  Talk about something being etched into your brain.  I guess I’ve got  additives and preservatives carved into my mind.  I can’t walk down certain aisles in a supermarket without thinking about that.  This is a good thing.

All of my friends were impressed by how athletic my mom always was and they would talk about how athletic she was…Actually they still talk that way.   Growing up hearing others talk about her definitely made me proud.  Even prouder that she is still doing it.   As my mom got older she cut out the running and cut back on the tennis, but swimming has been a great exercise for her.  It’s great to see her take it to a competitive and challenging level.  For 20 years I missed out on competition and most physical challenges.  Getting myself back into that is the best thing that I have ever done.  I did that at 45.  Seeing my mom do it in her 80’s (she turns 82 in a few weeks), is amazing.