Twitter Facebook RSS Feed
← Inspired By Mom: Where Did You Get Your Drive And Determination?
Vanilla Salty Balls with Protein →

One Day Can Change Your Life For Better Or Worse: How Will You Deal With It

One year ago today was going to be the day that signified a great day for me.  It was going to sum up all of the Self-Control, Willpower, Inspiration and Motivation (S.W.I.M.), dedication and determination that it took for me to complete my transformation.  It was supposed to be one of the best days of my entire life.  Instead one of the worst things that could ever happen to someone, happened to me that day.  No matter what I had a life changing moment that day.  It didn’t just happen to me, it happened to a lot of other people

I was getting prepared for my 16 week transformation photo shoot.  I had a little more than an hour before my shoot.  I jumped in the shower and heard my phone ring.  When I got out and picked up my phone I had a bad feeling.  One of my friends, Diana had called me and followed it up with a text (Call me ASAP, it’s an emergency).  Right away I felt like I knew what had happened.  I called her right back  and didn’t get her, so I left a message.  I really didn’t want to talk with her, I was hoping that if I didn’t talk with her than what I was thinking had happened wouldn’t have happened.  A few minutes later she called back.  She was pretty upset when she started talking, “Where are you?”  “Are you alone?”  “You might want to sit down.”  and then she confirmed what I thought that I already knew.  “Don was in an accident.  He was killed.”

Don was one of my closest friends.  I had known him for almost 12 years and we talked almost every day and hung out whenever we could.  I had gone to dinner with him and a group of friends including Diana the week before his death.  I showed up a little bit late for that dinner and he was at the other end of the table so we really didn’t get to hang out that night too much.   But we did get to talk a little.  He actually had just dropped 56 pounds after finding out that he had diabetes.  I was proud of him for making some changes that were going to help him stick around with us for a much longer time.  Since, we really only talked at the end of dinner, we were going to try to get together again some time soon.

Don had more friends than anyone that I have ever known.  He was more interested in helping others than doing things for himself.  He was happy seeing other people’s joy.  When one of his friends had a problem, Don was the first person that they would call and he would always be there for them.  He never had a drink in his life.  He had no idea what alcohol tasted like.  He had never done a drug in his life.  He got high on life.  He enjoyed life like no other.  The guy was always happy and he was always smiling and laughing.   He felt like it was a waste of time if  you spent your time bitching or you didn’t spend your time enjoying life.    He truly got everything that he could get out of life.  He even said that when he died, it would mean that his time had come and that he would have no regrets.  He had even made it clear that people would celebrate his life instead of morn his death.

When I hung up the phone, my first thought was that I had to cancel my photo-shoot.  I started thinking about it and I hear Don, calling me a dumbass.  “You can’t do anything about it.  It’s not in your control.  Live your life.  You spent 16 weeks on this and just about starved yourself the last few days and have drunk less than a gallon of water since yesterday.”  I’m sitting there thinking that it would be selfish to go forward with it.  I should just sit home and mourn him.  I knew that he wouldn’t want that.  The best thing that I could do is get out of the house.    Stay preoccupied.  I met the photographer over at my gym and let her know what had happened in case I broke down and she thought that I was crying because my photo-shoot was painful.  I know now that this was the best thing that I could have done.

Over the next few months I realized that I had learned much more from Don than I had ever thought.  Too bad he wasn’t still around while I was learning it.  I made a choice to live the way that Don lived.  I  learned a lot from my transformation, but I was inspired by how Don lived his life.  I had already begun to enjoy my life more, but now I think about what he would do and how he would treat people.  I learned that I should take every opportunity given to me.  If I want to do something than I should just go do it.  Don’t wait around for anyone if you are going to miss out by waiting.  Make your bucket list come through.  If you want to go climb Mt. Everest, than go climb Mt. Everest.  Be spur of the moment.  LIVE LIFE!  He made a huge difference in my life and how I live it.  He may be gone but for those of us who knew him, he is still with us.  When good things happen, even bad things, I still pick up my phone to call Don.

I can’t tell anyone else how to mourn, but the best decision that I ever made was to live the way that I believe my friend Don Theobald would have wanted me to live.  It makes me sad to think about him not being here, but I don’t think that I really ever mourned.  I live my life in tribute to his and all of us celebrated his life at his memorial just as he wanted.  I feel the same way.  I can tell you right now that when I die, I don’t want people to mourn my death.  I rather have them celebrate my life and if I left them something that helped them, then hold on to it and enjoy your life.

Don left behind tons of friends, relatives, a son, a daughter in law and a two-week old grandson.  I’m happy that him and his grandson were able to meet.  His grandson Charlie looks just like him and even has some of the same expressions. 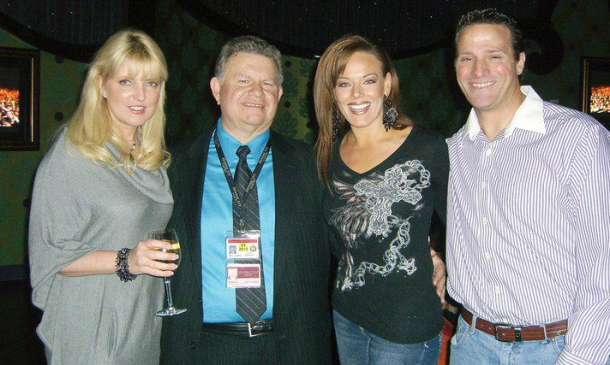 Posted in My Transformation, S.W.I.M. and tagged best friends die, dealing with loss, death of a friend, learning from others, mourning. Bookmark the permalink.
← Inspired By Mom: Where Did You Get Your Drive And Determination?
Vanilla Salty Balls with Protein →

Cristian Mihai
Everyday Power Blog
I Am a Spartan